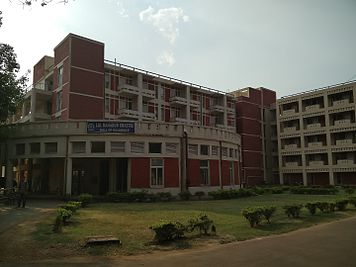 Lal Bahadur Shastri Hall of Residence, also known as LBS Hall is the largest hall of residence at IIT Kharagpur.

The hall was founded in 2011 and is the newest of all the 22 halls of IIT Kharagpur. In 2011, finished blocks (A, D) were allotted to M.Tech and PhD students. Later in 2012, the construction of B, AB blocks were complete and were allotted to the undergraduate freshers. The construction was finally completed in 2013. In 2014, graduate students were shifted to MMM Hall and B R Ambedkar Hall, thus making it an undergraduate hall in entirety.

The five floored (G+4) building of the hall is divided into four blocks - A, B, C and D, each of them fully connected through AA, AB, BC, CD and DD blocks respectively. With an expandable capacity of more than 2000, it currently houses 1997 students which includes around 700 first year undergraduate students. It has a separate two floor unit building attached to the southern side of building which provides space for two food messes.

The music room is equipped with all the required and most played music instruments with the greatest quality product. It's current location is C-Block ground floor.

The hall is fully equipped with space and equipment requirements for several sports activities. It has a badminton court, a basketball court, two table tennis tables, football ground, cricket pitch for net practice, and a volleyball court. There is a gym located at the ground floor of BC Block.

There is Common Room in the A block of the hall which houses a Sony TV to provide entertainment. Event, workshops and information seminars are usually conducted here.

Year 2016 : The Hall Day of LBS was celebrated on 3rd April 2016, Sunday. The hall was beautifully decorated and a DJ was also arranged at the ground between the C and D blocks.

Year 2017 : The Hall Day of LBS was supposed to be celebrated on 31st March 2017, however it got postponed to 2nd April 2017 due to an unfortunate incident. DJ and Food stalls were arranged in the AB ground.

Bronze in Sports and Games General Championship 2018-19 with 32 points.

Gold in Sports and Games General Championship 2015-16 with 62 points.

Bronze in Sports and Games General Championship 2014-15 with 48 points.

Consecutive gold for LBS Hall in the session 2015-16 and 2014-15. The autonomous bicycle, a submission by LBS Hall received accolades has also been covered by media websites.

Initiated in 2014, the LBS Recreation Month, or the #LBSRecMonth is a month long event aimed at increasing interactions between students of LBS Hall, IIT Kharagpur. It consists of a host of Team-building games and events with a prerequisite that a team formed must have a mix of students from at least two different batches.

Spanning a month, the event encompasses around 10 team events. Each event having teams with at least one 3rd year, one 2nd year and two 1st years students. LBS Recreation Month is a fun, innovative and an effective way to bring in interaction between various batches of students.

The events planned and held in LBS Recreation Month of 2014 are as follows:

(Italicized events were planned but not held)