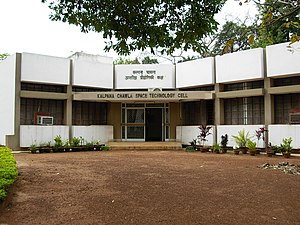 The group publishes a bi- semester newsletter, 'The Moonwalk', which features on latest ventures in space technology and astronomy related articles and developments.[2]

The Space Technology Students' Society was founded way back in 2008 by a group of students extremely enthusiastic about the frontiers of space technology. It was formed as an official student body under the Kalpana Chawla Spacec Technology Cell (KCSTC). Since then, the society has grown in size and activities. The idea of a national level space-oriented fest was conceived and thus implemented as the National Students' Space Challenge (NSSC) in the year 2011. NSSC has been successfully organised for seven more editions since then.

A subgroup of spAts, the FQTQ team which is a dedicated Astronomy discussion group was formed in 2016 under the guidance of Siddhant Singh.

The student body of spAts is divided into two subgroups - the Core team (which is more concerned for technological, management and outreach) and the FQTQ team (which is more based on Astronomical discussions and applications). spAts organises sky-gazing sessions, space-themed discussions and talks, webinars, lectures, presentations and publishes the bi-semester newsletter, "the moonwalk" for the people in the IIT Kharagpur community. The Team also organises the National Students' Space Challenge during the months of September-October.

SpAts organises its selections during early August, once per year that is aimed only for the new-coming First Years for a continued membership till the end of the members' tenure. spAts organises an introductory seminar before the selections, where the functioning of the society as well as about NSSC is presented.

The interested candidate has to choose either for a Junior Coordinator (JCord) or the FQTQ team as their portfolio during selections. For the JCord team, the candidate's technological, management, communication, literary, coding skills, etc are considered. For selections in the FQTQ team, emphasis is given more on prior knowledge from the fields of Astronomy and Astrophysics, presentation skills and interest upon the subject. Selections are done mainly on an interview basis.

spAts is mainly comprised of its two subgroups - the Core team and the FQTQ team. Each subgroup have their own undertaking tasks but mainly the whole team collectively organises the NSSC fest.

The Core team is works on various space technology application projects, for example the nanoSAT, Mars colonisation, Space Communication and others. They're mainly responsible for Management, Outreach, Communication, Publicity, Sponsor handling, Design, Web Design and Finance for the fest and the other activities spAts organises. They handle the Tech events during the NSSC fest.

First year members who've contributed as a JCord will be given a choice to switch over to the FQTQ team (which is done through a round of interview and presentation) or continue as a member in the Core Team as a Sub Head for the following edition of NSSC.

FQTQ stands for From Quarks to Quasars, which describes the team more oriented to astrophysics in general. They hold periodic discussions and presentations on various topics. Besides the sky-gazing event, open talks, webinars, content development, web is undertaken by primarily this team.

Conducting the fest remains a major task for the whole spAts team. The team structure is as follows -

spAts organizes a lot of activities within the campus, as mentioned below.

The spAts team interacts with the new coming Freshers batch during the Induction Programme through a series of presentations and workshops. In 2018, presentation on the life cycle of stars, the ever endless universe; and hand-on experience through water rocket lift-off workshop was conducted. The workshop received a positive response from the participants.

The National Students' Space Challenge, abbreviated as NSSC, is an annual space-themed fest organised in the month of September-October since the year 2011. It is India's first and the largest space technology and Astronomy themed fest. The whole spAts team is indulged in organizing the fest.

For more details find it on - NSSC

spAts also works to popularize astronomy among the people in the KGP community. Hence it organizes sky-gazing sessions every semester and also to cover exciting astronomical events, like the super blood red moon 30th January, 2017.

Every Year spAts observes the month of March as Space Month, where a series of open discussions, webinars quiz or presentations are held. This space month primarily aimed to bring and contribute towards recent developments in space technology.

The Moonwalk is a bi-semester newsletter brought by the spAts team. It includes articles written on several astrophysical ideas, new perspectives arising in space and planetary sciences, recent developments in the field, contributions by eminent scientists over the world and discoveries.