Kharagpur Robosoccer Students' Group, often abbreviated to KRSSG, is one of IIT Kharagpur's first endeavours in robotics research. It is a research group sponsored by SRIC as part of Centre for Excellence in Robotics. The aim of the research group is to make autonomous soccer-playing robots and participate in international competitions like Robocup and FIRA Roboworld Cup. Undergraduate students from all departments and years are a part of this team. The principal investigator for the project is Prof. A.K. Deb and it is also mentored by Prof. Jayanta Mukhopadhyay, Prof. D.K. Pratihar and Prof. Sudeshna Sarkar. [1]

The roots of KRSSG lie with Technology Robotix Society as one of the alumni, Aamir Ahmad interned at the Institute for Systems and Robotics (ISR) under Prof. Pedro Lima (former trustee, Robocup Federation), convincing him to bring Robocup to India. [email protected] challenge was organised by IIT Kharagpur in 2009. This event was the first of its kind in South East Asia and with this India joined the elite body of only 18 nations worldwide to host such a league. Students of IIT Kharagpur itself participated in this event, forming KRSSG. Following the event, KRSSG got faculty attention which prompted Prof. Jayanta Mukhopadhyay and Prof. Sudeshna Sarkar to formally take it up as a research project under them in 2010. This gave KRSSG its first funding from the institute and students started to join the group. With Sanjiban Choudhury and Kaustubh Tripathy taking it as their Bachelor's and Master's Thesis Projects, KRSSG soon grew to expand to a group of 10 students aiming to participate in FIRA 2010. KRSSG participated in FIRA 2010 with purchased robots, held in Bangalore with Sanjiban as the sole representative since it was during mid-semester exams. Although the team was eliminated in the first round, the international exposure proved to be very useful. [1]

Following this, the team started to design their own chassis and circuits. KRSSG then next attempted to participate in FIRA 2012 in Bristol, UK. The team, led by Gaurav Rathi, were all set to leave when their visa was denied. The next iteration, FIRA 2013, was held in Kuala Lumpur, Malaysia which saw successful participation. The mechanical design, circuit fabrication, control code and the AI were all developed by students of the group. FIRA Malaysia was also KRSSG's maiden entry into the Simurosot simulation league. KRSSG was one of only two teams who were using self-manufactured robots in the event along with Team Sahas from IIT Madras. Moreover, FIRA 2013 was the first time an Indian team won a match in FIRA. [1] 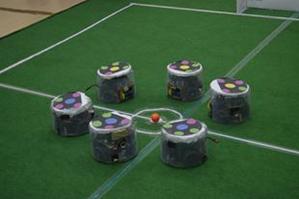 This project was a result of the success of the RoboCup India Challenge in the campus in August 2009 and led to the formal creation of KRSSG. The aim of this project is to develop a team of autonomous robots in accordance with the rules of International RoboCup Small Sized League. Some notable highlights of this project are the development of a team of omni-directional robots with linear and chip kicker that shoots and chips a golf ball. [2]

The RoboCup 3D Simulated Soccer League challenges control of virtual humanoid team of robots competing against one another in a simulation of the rules and physics of a game of football. This aims to control different kinds of humanoid robot models which has a field of view and also simulates communication between players like in real world soccer. KRSSG started working on this league in early 2015.[2]

The aim of the project is to develop a team of autonomous robots in accordance with the rules of RoboCup Small Sized League and the Mirosot league of the World Championship conducted by Federation of International Robot-soccer Association (FIRA). This involves development of a team of differential drive robots. KRSSG developed two versions of the Mirosot robots and participated in 4 FIRA Roboworld Cups.[2] 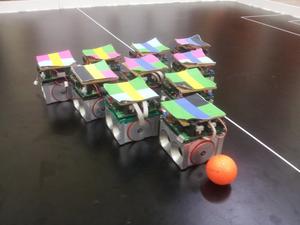 FIRA Simurosot is a simulation league of differential drive robots playing soccer. KRSSG started working on this after 2010. KRSSG has participated in Simurosot in3 FIRA Roboworld Cups.[2]

KRSSG has also started working on humanoid robotics. With students working on simulation league and also trying to get a Darwin Mini playing soccer, KRSSG is also working on designing it's own humanoid and getting it to play soccer. [2]

Code-O-Soccer is a coding competition conducted by Kharagpur RoboSoccer Students' Group in the month of October, the main aim of the event is to introduce the concept of autonomous soccer playing robots in students mind and motivating students to create a challenging strategy using the provided API on a three vs three robot match for which robots are provided by KRSSG.

It is going national for the first time in 2015 in collaboration with IEEE.[2]

KRSSG also has conducted workshops in IIT Kharagpur with IEEE and Intel to spread the culture of robotics in India and also to display it's work and skills.[3] 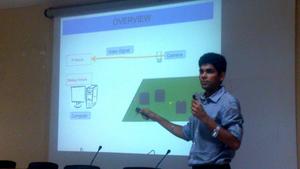 AI or Coding Team is the team that develops the strategy and high level control of the robot(s). It is responsible for developing the code architecture for robot control.

Embedded Electronics Team is responsible for developing the on-board control system and circuits of the robot(s). They work on cutting edge electronics and design and test the circuits followed by fabricating them.

Management team is responsible for the Public Relations including website and Facebook page along with the sponsorships for the team. They manage the events conducted by KRSSG and also attempt to bring collaborations with industries.