The Kharagpur Winter of Code, often abbreviated as KWoC, is an annual five week long program where students new or unknown to free and open-source software contribute to coding projects registered in the program by experienced mentors or project owners and gain experience in contributing to open source software. The program is hosted by Kharagpur Open Source Society, an independent student group at IIT Kharagpur, but is open to students of any university.

The motive of organizing the program is to help students have one-on-one mentorship in the early phase of contributing to open source software. This also helps the students, especially freshmen and sophomores in their preparation for Google Summer of Code which takes place annually in March.

Kharagpur Winter of Code has been online since its inception and operates on its website https://kwoc.kossiitkgp.in

The program invites mentors who have ownership or collaborative rights on open source software projects, to register the projects. In the last week of November, the list of accepted projects is released on the website and students begin signing up for the program. Students then start to look through the projects and choose one or more of their choice.

Coding period for KWoC begins in the first week of December. Students now contact the mentors, look through issues to fix or new ideas to implement. The communication and activity of students and mentors is monitored by the program managers and any necessary help is provided by KOSS. Students have to submit their project reports by January 6th, while the successful participation of students depends on the work they do and their mentor's evaluation.

Detailed role descriptions and goals are discussed in the Student's Manual and the Mentor's Manual of the program. 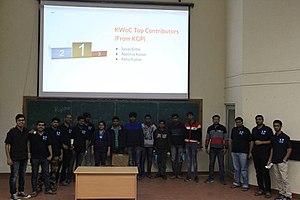 Top 3 contributors of KWoC 2016 along with KOSS team

In 2016, the program was announced on November 20th.[1] Around 930 students registered for the program along with 70 mentors. While only 40 students successfully completed the program, it received a widespread participation from 18 different colleges all over India.[2] The program was lauded by several successful participants, as it was their first significant contribution to any open source software.[3]

The program witnessed great positive response with over 1870 registrations by students. A total of 70 mentors and guided the students who sought to get experience working on open source projects. There were a total of 108 open source projects both programming and non-programming all hosted on GitHub. Owing to the astounding success of KWoC '16 and '17, on 20-21 Jan , 2018 KOSS IIT Kharagpur organised the first Open Source Summit in Kshitij.

KWoC 2017 was announced in association with Kshitij, IIT Kharagpur's annual techno-management fest. KOSS also organized an "open source summit" during the fest (January 19th - January 21st 2018) where top speakers (mentors and students) were invited for talks and were aided with appropriate logistics. All successful students' fees were waived off to attend the summit during the fest.