Ambar is the gender and sexual diversity resource group for the Lesbian, Gay, Bisexual, Transgender, Queer and Questioning (LGBTQ+) community residing in IIT Kharagpur Campus and/or officially associated with IIT Kharagpur. It comprises mainly of, but not limited to, current students, alumni, staff, and family of staff. The group also welcomes straight allies to join and support it.

Ambar's vision for IIT Kharagpur is a campus devoid of discrimination against minorities on the basis of gender and sexuality, where such minorities feel safe and free. This includes existence of a safe space for people who are still coming to terms with themselves and their sexuality (and/or are confused about it), along with a commitment towards ending sexism, homophobia, biphobia, and transphobia, present both internal and external to the campus community.

Ambar aims to advocate for the rights and equality of gender and sexual minorities within the IIT Kharagpur campus by creating awareness to increase the acceptance of such minorities. Moreover, Ambar tries to help people discover themselves in a supporting environment, alongside other people who are undergoing (or have previously undergone) the same.

In accordance with the Institute's mission to prepare its students to become contributing and compassionate citizens of the society, Ambar encourages all members of the campus community to participate in its efforts to promote social justice and eliminate discrimination in all its forms.

Ambar has a policy of not revealing the names of any of its members externally, other than the governors, to keep the sanctity of its safe space. 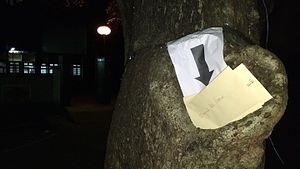 Letters placed in a heart shaped hole in a tree by Ambar, the LGBT resource group of IIT Kharagpur.

On 12 September 2015, Ambar placed sealed envelopes containing letters in a tree with a heart shaped hole on 2.2, in front of B C Roy Hall of Residence.[1] These letters were mostly handwritten, and contained stories that Ambar members said "touched them."[2] They also placed blank letters for students to write back to them[1][2].

The very first event organized by Ambar was KASHISH Forward film screening in association with Varta Trust on 1 October 2015. In it, an LGBTQ themed film screening was followed by a panel discussion on the topic "Acceptance – Making campuses Gender and Sexuality Affirmative". It saw a participation from over 125 people including both students as well as faculty.

On 11 October 2015, Ambar in collaboration with AIESEC, invited Harish Iyer to YouthSpeak Forum. The event was a success with a good number of students turning up to listen to his speech.

"Queer up" with Ambar[edit | edit source]

In Spring Fest 2016, Ambar marked their first public presence as an independent campus body by setting up a stall in the Arena on 1 February. "Queer up" with Ambar had the tagline "Equal People, Equal Rights, Equal Love" and celebrated Queerness in Spring Fest. A variety of tasks were organised as part of the event, including:

The event witnessed a huge support from people who visited the stall, and the audience showed a great amount of appreciation and enthusiasm towards the cause.

Ambar hosted a short film screening and interactive session titled Celebrating Diversity on 24 August 2016 to "discuss and debate issues that really matter, to question assumptions, biases and stereotypes, and to celebrate love in all its forms".

On 12 November 2016, Ambar invited Sambuddha Banerjee to explore gender in cinema in Pandora's Box. There were discussions on racism, reverse racism, sexism, reverse sexism, ableism, and the portrayal of various gender and sexual minorities in mainstream media. Hollywood and Bollywood movies were analysed for their take on queer issues.

In the month of June 2017, Ambar collaborated with IIM Ally(LGBTQ+ resource group of IIM Ahmedabad) and Umeed (LGBTQ resource group in IIM Kozhikode) to conduct Queer Pe Charcha. It was a month long education series on LGBTQ+ issues, covering a wide variety of terms and definitions, social issues and myths, legal discrimination and prosecution, etc. regarding the LGBT community.

On 4 August 2017, Ambar in collaboration with Sappho for Equality conducted a workshop on sexual violence for the campus community. The title of the event was "Sexual Violence Awareness and Understanding Gender Diversity". The topics discussed included the spectra of gender and sexuality, and sexual assault of all kinds.

Ambar held its second edition of Kashish Forward on 15 October 2017. The event presented 6 LGBTQ films from around the world:

The event ended with an interactive session with Sridhar Rangayan, eminent filmmaker and the festival director.

On 9 January 2018, Ambar invited its followers to write their personal stories that changed their perception of the LGBT community, and share it on their timeline with the hashtag #StoriesThatMatter.

Ambar held its first introductory seminar on 20 August 2018 to talk about the continued reason for its existence and its plan forward. There was also an interactive session on the "history of sexuality in the Indian subcontinent", along with the screening of several short films including "In a Heartbeat".

On 9 September 2018, Ambar called for a campus-wide Pride March to commemorate the historic Supreme Court judgement of 6 September 2018, which found the application of Section 377 of The Indian Penal Code to consensual homosexual relationships unconstitutional. About 80 people turned up for the event, including students and faculty. The March started from the Gymkhana, moved towards the Main Building, turned towards Tikka, carried on to Sister Nivedita Hall, traveled through the Pepsi cut, and ended back at the Gymkhana. It was Ambar's first collaboration with Click KGP.

On 7 October 2018, Ambar organised a stage play "Vagina Monologues" which explored consensual and non-consensual sexual experiences, body image, genital mutilation, direct and indirect encounters with reproduction, fear, shame, ecstasy, and several other topics through the eyes of women with various ages, races, sexuality, and other differences. The performers were women from all age groups, and belonging to different Societies and fields of study.

Pride week was celebrated from 2nd-6th September 2019 in association with Spring Fest, IIT Kharagpur to commemorate the historic Supreme court judgement that decriminalised homosexuality between consenting adults. On 2nd September, a privilege run was conducted at the Gymkhana. The exercise involved examining and acknowledging our privileges. On 3rd September, a panel discussion on 'Decriminalization of Section 377: What lies ahead for Inclusivity and Equality' was held in collaboration with the Debating Society and Sappho for Equality. On 4th September, a movie screening was held in collaboration with Technology Filmmaking and Photgraphy Society. Documentaries and short films on queer lives were showcased. On 5th September, a pride-themed quiz was conducted with Quiz Club. The pride march happened on the evening of 6th September and involved poster making and face painting. It was photographed by Click KGP.

Ambar conducted a series of instagram live sessions called Quarantine Queeries on the occasion of Pride month in June 2020.

Journey of a Trans Alumna of IIT KGP: A conversation with Ana

Queer representation in Cinema with a queer film maker: A conversation with Sridhar Rangayan

A pride-themed quiz was conducted with Quiz Club on 30th September.

On 26 August 2020, a campus safety workshop was conducted in collaboration with Jhatkaa.org. It covered sexual harassment in campuses, the laws surrounding it and the duties of Internal Complaints Committee (ICC).

The third anniversary of the historic supreme court judgement decriminalizing homosexuality was celebrated from 31st August - 6th September 2020. A series of virtual events were conducted.

Queer and Queerious : A conversation with Sayli on mental health and queer affirmative counselling practice.

Queer and Queerious : A conversation with Dr. Pragati Singh on Asexuality and the unique challenges faced by asexual individuals.

Art exposition : Artists were encouraged to send their art work with a queer theme and they were featured on the page.

Alumni Series : Stories and experiences of alumni of Ambar-IIT Kharagpur

Ambar put together a list of resources for victims of abuse in India including helplines, counsellors and legal aid [1]. It was made using publicly available information.