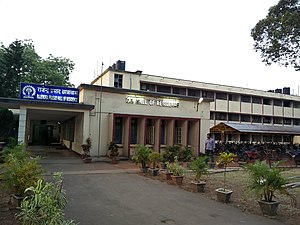 Rajendra Prasad Hall of Residence, known as RP Hall, is one of the oldest halls of residence at Indian Institute of Technology, Kharagpur. It is named after

Rajendra Prasad, the first president of the Republic of India. RP Hall is the second largest undergraduate hall of residence, in terms of size and boarder strength, and was the largest until LBS was converted into an undergraduate-only hall in 2014.[citation needed] It is the closest hall to Puri Gate.

The motto of the Hall is श्रेष्ठता एवं दक्षता (Best and Efficient). The hall plaque, as recited religiously during freshers' introduction, orientation programs and hall elections goes as follows:

This hall is named the Rajendra Prasad Hall of Residence in gratitude and admiration for the dedication and sacrifice with which Dr. Rajendra Prasad, first president of the Republic of India, has served his country.

RP Hall was always known to have housed some of the most chivalrous and well mannered boarders during yesteryears, hence paving way for its motto. The image is always taken care of by the incoming batch of students, where manners and etiquette are highly emphasized upon by the seniors. Established and inaugurated in 1954, the hall completed its diamond jubilee in the year 2014-15.[citation needed]

Every year, during the farewell ceremony for the final year students and swearing-in ceremony of the incoming hall council members, several awards are given out as a vote of thanks to the graduating boarders for their huge contribution to the hall culture and performance in championships.

The hall has been divided into 5 blocks: A, B, C, D, and E. Each of the A, B, C, and D blocks has two floors above the ground floor, while E has three. There are 47 wings in the hall (3 in A, 6 in B, 13 each in C & D and 12 in E). While A, B, C and D are collectively known as old blocks, E was inaugurated in 2009[unverified] and is known as the new block. The old blocks have single and double occupancy rooms, while E has triple sharing rooms. The mess and the two common rooms are adjacent to the A block and are near the entrance gate. There is one more entrance to the hall apart from the main gate, which is mostly locked and is opened in special occasions. It opens right behind one of the cycle sheds of the hall. The hall has three cycle sheds in total. The hall office is situated in A block, while library is in B block.

The mess consists of two dining halls, mainly known as old and new mess. It also has two pancake machines, a store room, mess office and more than 20 workers serving meals 4 times a day each day of the week. The old common room has a LCD television, with home theater sound system installed. It was renovated with state-of-the-art wall paints in the year 2012, curtains, exhaust fans and window nets were also installed. It has a seating capacity of around 200 during the times of cricket matches, havan-puja or hall elections.

The hall has 3 eating outlets - Carlos (owned by Kalyan Bhattacharjee), Rocky's (owned by Rockey Kaleliya) and Nescafé (owned by Sambit Majumdar). It also has a stationary shop (owned by Maity), barber shop and a cycle repair shop.[2]

R.P. Hall has left its mark in several places when it comes to glorious performances as a unit. The Rangoli made by Surendra Kumar Verma and team in the year 2010-11 got an entry into Ripley's Believe It Or Not.[3] In dramatics, Spartacus (Hindi) in the year 2012-13 directed by Kartikeya Pradhan and Pankaj Kodan broke the record for highest points in a dramatics event, notching up 97.5 points out of possible 100, clean sweeping all the awards and winning the Gold medal.[unverified] Aladdin The Musical in the year 2014-15 directed by Nayrhit Bhattacharya and Mahesh K.S. was the biggest ever play on the stage of Kharagpur in terms of sets, costumes, budget and cast.[unverified] The Illumination records are made and broken every year by the R.P. Hall itself, ranging from maximum area covered to the highest chatai to the maximum number of oil lamps lit at once.[unverified] The Deputy Director and ex-Dean of Students' Affairs, Prof. Souvik Bhattacharya hailed R.P. Hall's efforts during Diwali as 'beyond the competition'.[unverified] The aquatics team of R.P. Hall is known for being shark-like in the pool, with sheer dominance spanning over last 7 years across all the swimming events and Water Polo.[unverified] The Design team, making contributions to Illumination-Rangoli, sets of various dramatics events and other designing affiliations is known to be the best in business.