Table Tennis is one of the 13 sports which is a part of the General Championship during Inter IIT Sports Meet. All the IITs have indoor facilities for successful conduction of the matches during the tournament. The sport sees participation from all 17 IITs in both men’s and women’s format.

The playoff format follows a best-of-series throughout the competition with 5 and 3 games for men’s and women’s respectively. Each game is a best of 5 sets of 11 points each for men's and a best of 3 sets of 11 points for women's. A player from a team can’t play in more than 2 matches. This means that a minimum of 2 players in the women’s team and 3 players in the men’s team is needed. For a men's match, (A, B, C) represents the first team and (X, Y, Z) represents the second team.[1] The order of matches is as follows:

IIT Kharagpur has a separate building (generally referred to as the Old Gymkhana) dedicated to Table Tennis, just behind the Volleyball Court and beside Iosys. It has 4 Stag 1000 DX table tennis boards, and a matted floor.[1] Non-marking shoes are mandatory for playing. The old Gymkhana is accessible only to the Inter IIT probables from 6:00 pm to 8:30 pm everyday after the Open IIT table tennis tournament till the time of Inter IIT sports meet. A temporary coach is hired generally after Durga Puja holidays till Inter IIT for the team.[1]

The current administrative positions held by officials in the Gymkhana are:[2] 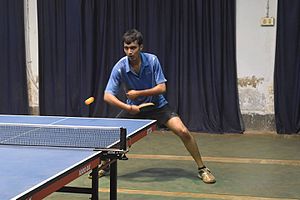 Inter IIT probables are selected on the basis of their performance in Open IIT table tennis, which is held in the month of September at IIT Kharagpur. Usually 4-5 girls and 8 boys are listed as probables. These are then trained by the temporary coach to undergo rigorous training and daily practice of approximately 3-4 hours.  A league is conducted towards the end of November which finalizes the 2/3 girls and 4 boys (top 4 in the league) for the Inter IIT team.[1] 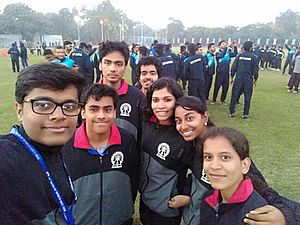